In my last post I wrote about some of the reasons why I dislike play structures and therefore do not take my group to play on them.  However, there are times when I may make an exception.

There are play structures located in many of places that we visit.  The school has one but we never go there to play – we are usually at the school just to pick-up or drop-off someone or something and we are on a limited time schedule.

Every park we encounter also has a play structure of some sort but when we visit parks we are there for a different purpose.  We go to explore the gardens and forest trails.  We collect nature related items, or play tag and ball games in the big open fields.

On our last field trip we went to Kildonan Park – an excursion we usually make at least once each summer. This is place we are very familiar with but we still manage to find things we’ve never seen before.  Like this year when we found this massive old tree;

Holding hands together we couldn’t even reach halfway around it but we still tried to climb it.  There was also something else new to discover here on our visit this year.

Last year when we visited we had watched from our favourite picnic site as big tractors tore out the old play structure – how exciting!  This year when we parked the van and disembarked on our adventure we saw the new playground.  It covers a vast area compared to its predecessor – but I’m not sure why they chose to have it so close to the main roadway.

It was because of the road that I was originally going to say no when the children asked we could check it out but I was curious too.  This year the majority of my group falls in that 5-12 year old range and the youngest is three.  So, instructed to stay together we checked out each of the separate areas.

The first area is geared toward younger children.  It has a small pirate ship structure – typical ladder and slide – the boat could provide some play value but my group was uninterested.  Everyone was immediately drawn to the sand ‘box’/table – but certainly not for the purpose that it was intended for;

It makes a terrific balance beam and the sand is nice to jump into – just aim for the middle not the edge.

I do love the pathways and the little bridges over the dry creek beds (except that some are so close to the road);

I think it would be nice if some were arched instead of flat.

I detest the ‘baby’ swing since my 3 year old couldn’t see over or around the gaudy yellow plastic restraint.  I can’t imagine any baby that would be happy confined in it.  I loved the little forest area with the brightly covered toadstools; 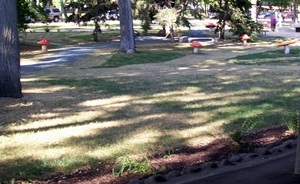 It was popular with everyone in my group for climbing on, sitting on, jumping off and more; 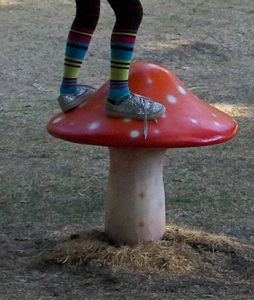 And right in the middle there is an awesome tree; 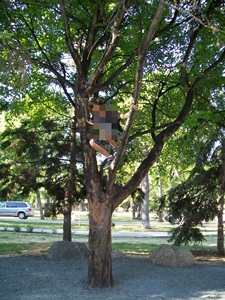 This toadstool forest was the favourite area for my group and they would have stayed here longer but it was time to move on if we were going to see everything we had planned for today.

The next area was the largest and contains an expansive play structure.  There are many ramps and ladders and more slides than I have ever seen on one structure.  A child could practice going up and down all day.  There is a short video of the new playground available here.

I have no good pictures because it  is an enormous structure and there were several young children playing on it.  All of them well below the age stated on every one of entrances;

Most of my group of children did not even venture onto the structure and those that did were there for only a couple minutes.  However, they did appreciate the difference in heights of the various areas because it allowed them the opportunity to do things like this;

The older ones in my group did enjoy the three separate climbing structure – which interestingly were too difficult for the younger children to limb.  Finally, a structure that offers a challenge! 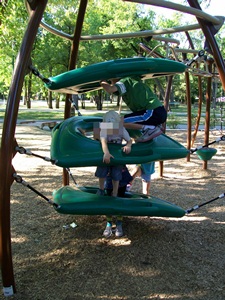 We liked this six foot tall climbing rock too;

But even youngest was able to climb it with ease; 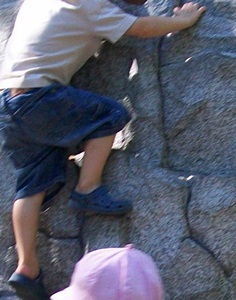 So, we’ve tried out this new playground and liked some aspects of it.  The parts we liked most were probably those that cost the least to build. Will we be back?  Not likely – at least not often.  There’s more to explore in the forest.