I opened my front door and thought ‘What a beautiful sunny day’  – but wait, it is cloudy.  “Why does it seem so bright on such a cloudy day?”

I looked again.  Autumn seems to have arrived suddenly and winter is on its way.  The Elm trees that shade my yard have lost all their leaves.   The foliage usually blocks my view of the sky from here but now that the branches are bare the light comes through even on such a cloudy day.

A thick blanket of leaves covers the garden so I can barely see the gravel path.  Sigh.  Good-bye my friends.  Sleep well.

Back in March I wrote a brief history of my front yard garden and my plans to redo the whole garden.  You can read about it here.  Then in May I continued the saga as I began to create the space to plant my prairie garden.   I planned to write another chapter once the plants were in the ground but I never got around to it.

So here is the ‘before’ picture I took of my front yard; 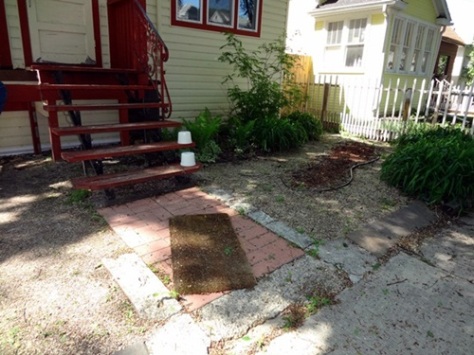 This was taken in May as we began taking apart the old steps to make room for the expanded garden space.  You may notice that these old garden beds contain mainly day lilies along with a few other plants that had managed to survive.

The steps and sidewalk were then relocated to the far left side of the landing and a bench was added so we could sit and enjoy the new garden.  I left that big bush under the window (I don’t know what kind it is) and the Hosta which seemed happy this year.  All the other plants were dug up and most of the gravel was replaced with more soil.

Then I planted the seedlings from the shade garden kit that I purchased from Prairie Flora.  The plants include:

I’ll admit that at first the garden looked rather sparse.  There were a few casualties over the summer – mostly due to the neighbourhood cats who decided I had built the world’s greatest litterbox 😦

Some of the young plants grew much quicker than I anticipated.  Many even produced flowers – something I didn’t expect them to do in their first year.  I know that all these plants  were busy putting down strong roots to support them for years to come. 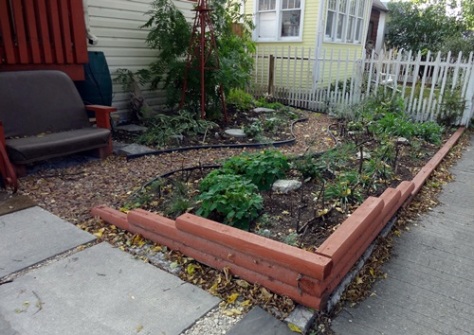 In this view you can see some of the sticks I put in the soil to deter the nasty cats; 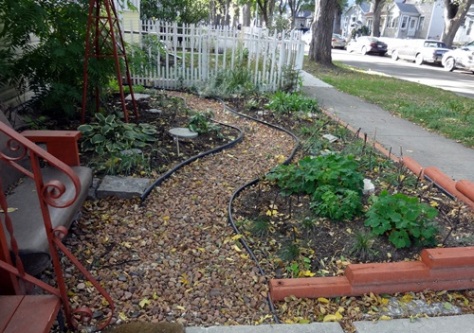 Yes, as I look at the thick blanket of leaves that now covers my prairie garden, I am a little sad.  As these young plants prepare for the long cold winter ahead I will say good-bye, for now.  I’ll see you again in the spring – stronger and more beautiful than ever.