Friday was an inservice day so the school-age children were here for the whole day.  I decided it might be a good day to bring out ‘the bin’.

I had filled the bin months ago when I collected some of the leftovers from the garden.  I had intended to use it as a sensory bin for the toddlers.  Now, with a good layer of snow on the ground I thought the bin might also assist the older children to remember our past gardening adventures.

As the children gathered at the table in the sunroom I opened the bin – the aroma was amazing;

MMmmm, sweetgrass smells so wonderful.  There were other things in the bin too but the scent of the herbs was overpowered by the sweetgrass.  The children spent some time exploring the items and were able to identify both the wheat and the oats; 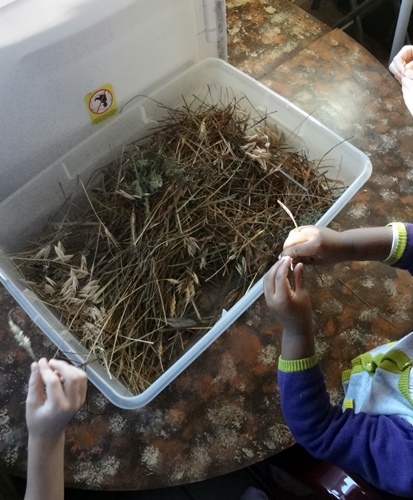 They selected items they wanted to include in a little sachet to take home.  They cut up the bigger pieces to fit; 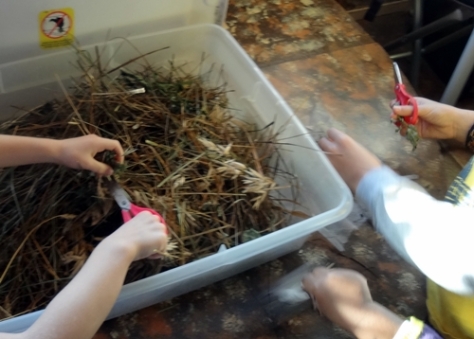 And created their own sweet smelling little bundle;

The sunlight streaming through the sunroom window was so bright one of the children wished he had sunglasses – and suggested that we could use the craft supplies on the table to make some.  Good idea 🙂

He selected items from the craft bin that could be used to make sunglasses – egg carton pieces and colored transparent film.  Then the construction began;

He also suggested that if we attached a stick on the side of the glasses they would be easier to hold instead of trying to tie a string around your head – so creative.  The finished products may not have worked as well as we would have liked but the process was amazing to watch.

Do you remember when the product was your major concern and ‘I can’t’ was a common complaint?  I do.