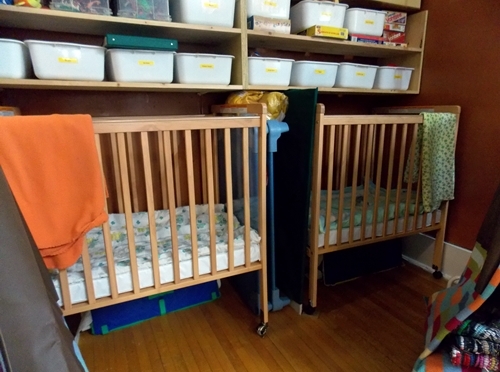 Wow, it has been almost four weeks since I’ve written a blog post — bad blogger. I’ve been super busy – full days with the children, practicum student visiting, conference, presentations, and several evening meetings every week. There has been plenty to write about but no time to write. I started this post more than a month ago so I better finish it before I move on to other topics.

Nap time. When my own children were young we sometimes struggled over nap time. The ones who I felt most needed naps were the ones who were reluctant to take them. There were battles. So, when I first opened my childcare home I was a little apprehensive about being able to get so many little ones to nap.

At first I had used the second floor bedrooms as nap areas – infants in playpens, toddlers on beds. The daily set-up and take-down process was arduous but generally everyone was cooperative. There were, of course, a few exceptions. My frequent trips upstairs to check on the (non)nappers were sometimes disruptive to those that were actually sleeping.

Before the end of my first year in childcare I relocated the toddler/preschooler nap area to the main floor using cots and the living room couches where I could supervise more easily. I continued to use playpens in the second floor bedrooms for the infants to nap. There was still a lot of time required for daily set-up and take-down and many trips up and down the stairs.

I found it interesting that the older children napping on the main floor often slept longer than the infants who were napping upstairs. Many parents seemed surprised too – most of these older children resisted napping when they were at home yet here they actually enjoyed helping with the nap time set-up, fell asleep quickly, and were often difficult to wake after nap.

There came a time when I began to question the safety aspect of having the infants napping upstairs. Yes, we did practice emergency evacuations monthly and sometimes even at nap time. The evacuation times were considerably longer at nap time and although the older children were cooperative during drills – waiting patiently while I ran upstairs to get babies – I wondered if they would do so if there was a real emergency.

It wasn’t something I wanted to risk. I relocated the playpens to the main floor – giving up a little play space but giving my family back the privacy of their own bedrooms. I chose to leave the playpens set up – losing a small amount of space vs. a large amount of time. I detest setting up playpens.

In my most recent renovation I expanded the space allocated to the playpens. My intention was to eventually replace the playpens with cribs. Eventually came earlier than I anticipated because I found some affordable – compact – cribs at Quality Classrooms. In all my year of perusing equipment catalogues I had never noticed that some of the cribs were compact – taking up no more space than a playpen – and on wheels too. 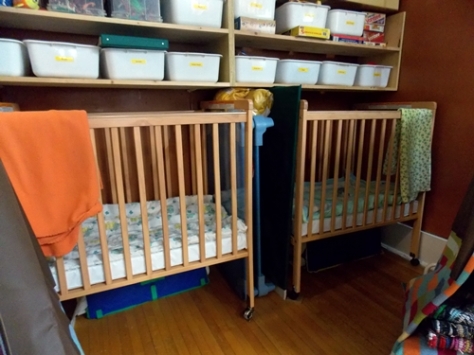 The extra space is now used to store the preschooler’s cots so they too are out of the way when not in use. Nap time set-up and take down now takes less than five minutes and all the children are visible while I complete the task. When not in use the cribs and cots are out of sight behind these rolling room dividers. 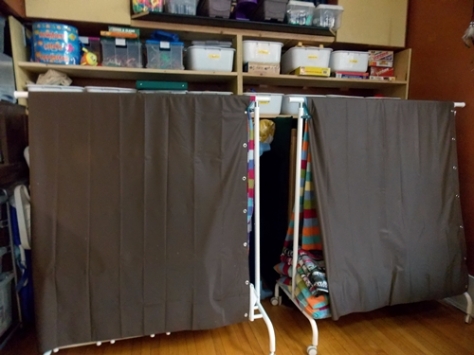 My intention is to use these dividers as easels for art activities but we haven’t tried that yet.

The best part is that all the napping children are within 12 feet of my centrally located desk and within 20 feet of an emergency exit. I’ve come to another conclusion too. As I’ve observed the children as they settle down for nap time I’ve noticed that there are no arguments when they can see me. They lay happily in their beds, talking or singing quietly, occasionally smiling and waving at me until they fall asleep.

I wonder if nap time struggles are not really caused by resistance to napping but rather by the feeling of being left alone in a ‘quiet’ space where the children may actually feel abandoned. Or, maybe these children sleep so well because they’ve been busy playing all morning and getting plenty of outdoor time too.