Anyone who has a toddler should expect to hear them screech ‘Mine!’ many, many times.  It’s normal. Working with a group of toddlers it is a regular occurrence to which I am accustomed.  For months now there has been an interesting daily ‘dispute’ between two of my toddlers – I will call them Bunny and Bear for this post.

It started with the felt ice cream cones.  Bunny claimed the pink one and always had to have it nearby when she was in the playroom.  If Bear saw the pink ice cream cone unattended he would pick it and Bunny would begin to scream.  Bunny would grab the green ice cream cone and offer to trade and Bear eagerly accepted.

Both these toddlers are completely agreeable throughout this process  but they sound very upset.  Their actions are frantic and there is near constant wailing “My ice cream! My ice cream!”  A gentle reminder to just ask and say please would usually decrease the intensity of their ‘conversation’.

However, problems arise when others in the group become involved.  The ‘Defender’ considers Bunny to be their ‘best friend’ and refuses to allow others to touch Bunny’s ice cream cone. The ‘Collector’ wants all the best toys.  Anything deemed ‘special’ by anyone else is a must-have item for the Collector.  The Collector rarely plays with any of the toys but doesn’t want anyone else to have them either.

The ‘Defender’ and the ‘Collector’ usually choose physical aggression instead of words – they seem to thrive on it and sometimes they even initiate it.  If a defender notices the unattended pink ice cream cone they will pick it up and not give it to Bunny.   Instead, they taunt Bear with it and the battle begins.

These daily brawls were becoming more intense and disruptive so I removed the ice cream cones from the toys available for play.  That’s when the situation became even more interesting.  On learning that the ice cream cones were ‘gone’ Bunny and Bear chose plastic doughnuts instead – strawberry for Bunny and chocolate for Bear.  Whichever one of these toddlers entered the playroom first would immediately take the two doughnuts and wait for the other toddler to arrive and then give them ‘their’ doughnut.

Likewise, the Defender and Collector continued to try to control ownership of the preferred toys.  There were only two ice cream cones but there are three donuts and there are still battles over the two ‘selected’ ones.  When the doughnuts were removed then the bubble bottles became the chosen toys. There are several bubble bottles but Bunny & Bear each have a favourite one. The battles continued.

For Bunny & Bear it’s not really about the specific toys – it’s mostly about the friendship.  As the various toys come and go the one thing that remains consistent is that there is one chosen for each of these two children.  Bunny & Bear enjoy each others company and these toys are an invitation to ‘come play with me’. 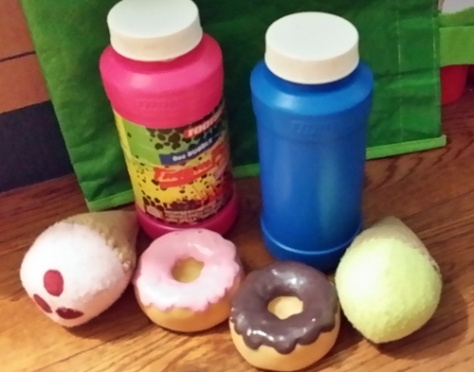 The Collector is all about the toys and the other toddlers just get in the way.  The Collector is most content when playing independently – with ALL the toys.  The Defender is focused on ownership too but their most desired ‘possession’ is power.

I’ve been working on this post on and off for a few weeks now and I struggled with how to end it.  That is probably because the ‘situation’ hasn’t ended.  This isn’t a ‘we had a problem and this was how we fixed it’ post.  It is my observation of one small part of the daily interactions within this group of toddlers.

The conflicts will continue and I will continue to observe.  I will step in to redirect behaviour that may be dangerous.  I will experiment with the room arrangement and toy selection.  I will offer to mediate disputes if required but mostly I will allow the toddlers to solve their own problems.  The conflicts are a normal – a necessary part of toddler development.  The process of learning social skills to interact with others and make friends.