The weather recently has been a bit of a deterrent to long periods of outdoor play.  Even when bundled up in warm clothing the littlest ones can get chilly crawling around in the snow.  The heavy clothing and deep snow can cause a lot of frustration yet we have still managed to be outside for at least some time every day.  After all, long periods of being stuck indoors is very frustrating too.

One perk to having my husband home from work during winter break means I have an extra set of hands.  So, for an extra special treat we had an outdoor fun day complete with lunch cooked on the fire. I did most of the food prep before the children arrived and hubby had the fire good and hot before the children and I headed outside.

The foil baked potatoes had been cooked first – I thought I had a taken a picture of them cooking but I guess not – it was funny because the fire nearly melted the metal colander I stored them in 😉  The bannock went on second – I chose to make them biscuit style instead of cooking on sticks because few in this group would have the attention span to stand still long enough to cook them.

The children were much more interested in mostly playing on the hills and just occasionally stopping by to check on the food and warm up by the fire. 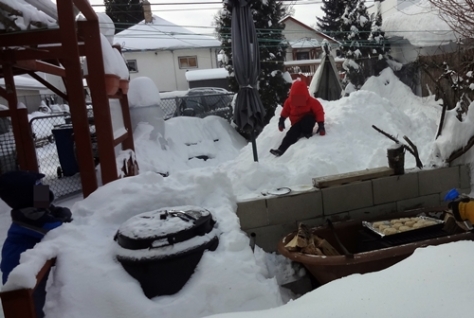 Of course the tipi on the far side of the yard is another favourite place too;

The wieners were the last thing left to cook.  Some of the children helped briefly but were a little too far away to get much heat.  It probably would have been better if we had more flames like we did at the beginning but the low fire worked eventually; 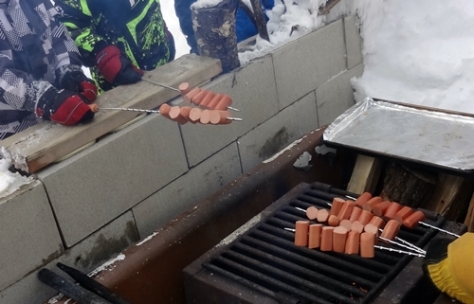 It was a learning experience for all of us – not our first fire but our first entire meal cooked on the fire in the winter. Oh so yummy;

Everyone just devoured their lunch – and two fell asleep at the table – after all, it was a long morning full of outdoor play.