There is not nearly enough space in the playroom for all the toys I own so the majority are stored in bins in the basement.  Puppets, blocks and animals are sorted into groupings of similar items so it is easier for me to select the ones I want to bring out when I rotate toys. I have a spreadsheet which helps me keep track of when toys are added to or removed from the playroom.

I usually manage to get every toy into the playroom for at least a few weeks each year – more often if the children have favourites or request a specific toy.  Occasionally there are toys that don’t get brought out because they are not developmentally appropriate or interesting for the children enrolled at the time.

Last month when I put the castle blocks and the puzzle people back into storage I brought out the stacking cups and Waffle Blocks instead.  One by one as the children arrived and entered the playroom I heard “Ooooh, what are those!?” or similar comments.  I was a little confused as these are old toys so I checked the spreadsheet again an realized that it had been more than two years since the last time the Waffle Blocks were out! 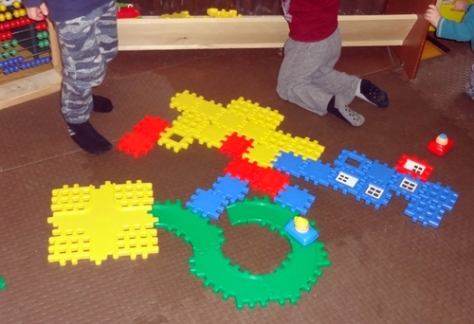 In the past I’ve had some groups that found these blocks boring – making nothing more than a cube or two and maybe adding a roof.  Other children have had difficulty forming the  cubes ‘properly’ and easily became frustrated, constantly asking for assistance.  I’m not concerned about ‘proper’ cubes so I tend to let them figure it out.

It is somewhat difficult to make weapons out of Waffle blocks which may have forced this group to expand their interests a little more.  Also, because I don’t have a lot of these blocks, if they want to make something BIG they have to work together on one structure.  I’ve considered getting more Waffle blocks but then I watch the children problem solve ‘not enough blocks’ and think maybe less is better.

I was particularly impressed by the architecture involved in this  creation;

Waffle blocks have never been one of my personal favorite construction toys but I was definitely pleased with what this group of preschoolers managed to do with them.

One thought on “Waffle Blocks”