Spring is such a busy time for me.  As usual I’ve been collecting pictures to use in blog posts but not leaving myself enough time to actually write posts 😦

So, here is a roundup of what should have been three posts;

I made a batch of homemade glue for an art project but then realized the recipe made much more than we needed and it doesn’t keep for very long. So, I dumped it in a big bin along with paper bits from the shredder, wool scraps, glitter and paint powder.  The children enjoyed mashing it all together – no pictures of that part because it was way too messy to have a camera nearby.

Initially the mixture was extremely sticky and some of us were not impressed by the sensation of having our hands coated in the goo.  Eventually the paper absorbed enough of the glue and made the mixture easier to handle.

Later each of the children took a portion of the mixture to work with;

Or form into mini balls and throw around the room;

They pressed the mixture into the shape of the bowl and then we let it dry; 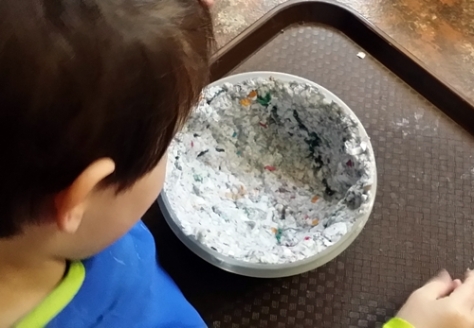 It took a lot longer than anticipated – nearly a week before they were dry and ready to take home; 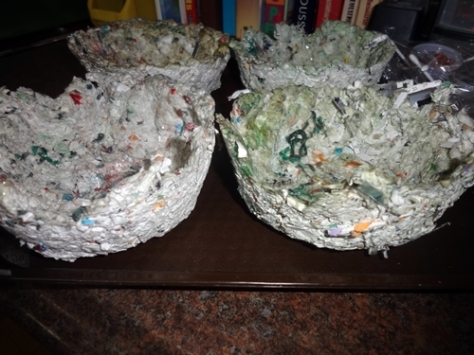 Outside, now that the snow is gone, the boys have been begging for me to open the ‘summer toys’ bin. So far I have resisted – knowing there will be a big issue over who gets the one Batman figure (which may mysteriously disappear).  They’ve managed to keep themselves busy with the loose parts and eggs; 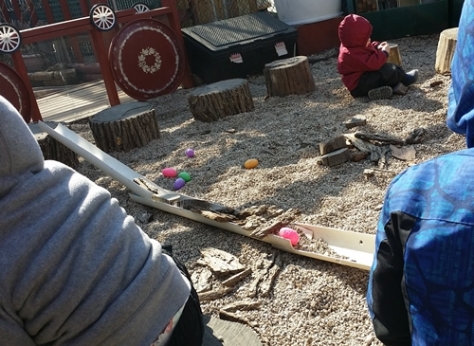 The longer periods of outdoor time have meant some are very tired by nap time (or earlier).  One however, has been using quiet time to become a jigsaw puzzle expert. He has now completed ALL of my 100 piece puzzles several times and can finish two of them in one afternoon.

I decided maybe we should try something a little more challenging – so I brought out a 500 piece puzzle.  This part took him two days with no assistance from me;

He did find the trees and mountains a little more difficult so I assisted with sorting some of the pieces. He is persistent and refuses to give up without finishing.  By the third week – after about 12 hours of actual work – he had done this much; 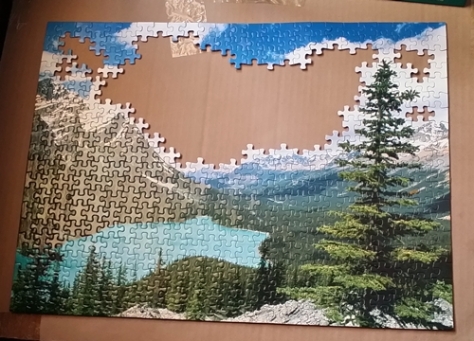 I think that is very impressive for a four year old 🙂  I’m not the only one who has been busy.