Mali and Malta joined our family in July 2006 when they were just five weeks old;

They were sisters and best friends and together adapted quickly to living in a busy childcare home.  They usually loved all the attention they got from the children but also knew they had quiet spaces to escape to when they had enough.  I often commented on their ‘synchronized sleeping’; 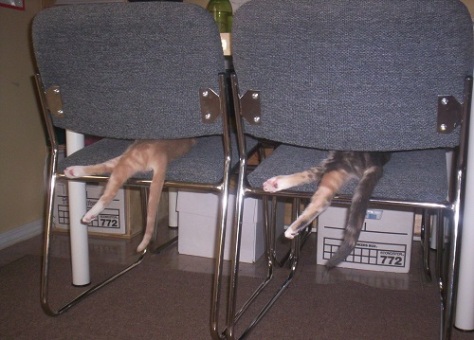 Over the years they got bigger – too big actually – Malta carried a little extra weight but Mali was very overweight;

They were put on a vet recommended diet and dropped down to a healthier weight.  They still sometimes beg for food from the children so ‘Don’t feed people food to the cats’ has been an important lesson for the children.  It has also resulted in many wonderful conversations about healthy diets for both children and cats.  Through it all Mali and Malta remained best friends and still enjoy playing with the children and having alone time too. 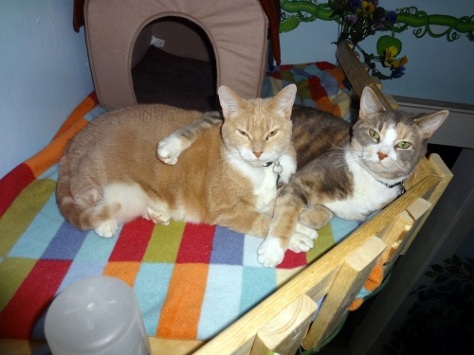 Last winter when we first introduced a new cat into our family I was slightly concerned that the two bigger, bonded cats may pick on the little newbie.  Sure, Mali & Malta considered children, and even our old dog to be acceptable housemates but they had never lived with another cat.  I wasn’t certain how the ‘old’ cats would feel about another cat in the house but I optimistically envisioned that the old cats would teach the new cat all the house rules and everyone would live happily ever after.  I was wrong.

Although ‘Button’ was the name given to the tiny little cat at the humane society and is her official name on her license and other papers, she was soon renamed.  We call her ‘Monkey’ most of the time – sometimes ‘Monkey-Butt’ because she is a very mischievous, naughty, sometimes ornery little cat with a big attitude.

She taunts and torments the older cats.  She pushes boundaries – growling in protest when removed from places she shouldn’t be and then immediately returning – sitting there glaring as if to say ‘I go where I please, when I please and you can’t do anything about it’.  She opens doors and cupboards and has stolen whole sandwiches left unattended for just two seconds.  Her early life as a stray allowed her to perfect her hunting techniques and stealth mode – for the old cats there is no escape.

Malta seems very afraid of Monkey – running/hiding from her and refusing to enter a room Monkey is in.  I wouldn’t say Monkey is mean – just more like a toddler who keeps poking you trying to get a reaction and then laughing.  Mali has become grumpy – like the angry old woman who yells ‘Get off my lawn!’ when the neighbourhhood children play there – Mali hisses and snarls and chases Monkey off counters and other places she thinks she shouldn’t be.  Places that include my lap – I have battle wounds from cat fights that have occurred on my lap.

Monkey is not longer the scrawny little stray she once was – she has become a little ‘chunky’.  Mali & Malta however have lost more weight than they ever did on their diet. I started giving them regular food instead of ‘light’ food and when they threw that up I gave them food for sensitive digestion.  They still had difficulty holding that down and were getting so thin that I was concerned about their health.

I took them to the vet and after a thorough exam and blood tests he ruled out any illnesses.  They are however very stressed and have developed stomach ulcers.  I now have to give them medication twice a day and they have prescription cat food.  I also have a plug-in diffuser that spreads peace & joy & love (cat pheromones) throughout my house.

Fingers crossed, so far there have been no more cat fights or vomit to clean up.  Mali & Malta seem more relaxed – we’ll return to the vet next month to see if they’ve managed to regain some of their lost weight.  Monkey (finishes licking all the dishes in the sink and leaves a trail of wet footprints on paperwork as she walks across my desk) hasn’t lost any attitude yet though. 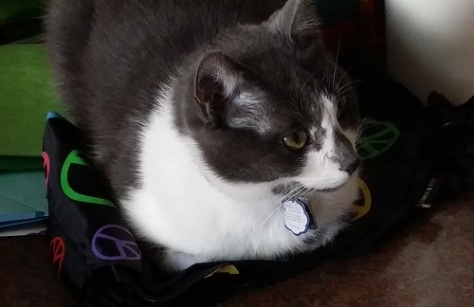