It is December 31st and I have not written a post yet this month.  *sigh*  When I first started blogging (seven and a half years ago) I intended to write every day.   I soon realized that once or twice a week was sufficient.  Lately it has been only once or twice each month.  I really want to write more. I plan to write more. When I’m working out at the gym, outside hiking, or enjoying a hot steamy shower I create fantastic posts in my mind.  Sit down at the computer and….nope, got nothing now. Today I am adamant – I will write something to end the year.

I hosted our family Christmas dinner for nine on Christmas Eve.  The schedule was perfect – I had one full day for prep and cleaning before dinner day.  Stores were open so I didn’t fret about ‘what if I forgot something’. Of course I didn’t actually need to run out and get anything – that only happen’s when the stores are closed.  I made three vegetable dishes, two potato dishes, turkey, gravy, and a HUGE batch of stuffing.  Everyone loves stuffing so I make a separate roaster full of stuffing – used seven loaves of bread!

There were also the little extra snacky things like pickles and cheese and cranberry sauce etc that don’t require cooking.  I had done all my baking in the weeks before Christmas so dessert was covered (even now we still have dainties waiting to be eaten).  The whole dinner was completely stress free.  I had plenty of helpers available for the last minute ‘get everything on the table while it is hot’ rush and then everyone got to eat. 🙂

I ran three full loads through the dishwasher that day and washed four sink-fulls of bulky items but the kitchen was clean by 9 pm.  All the leftovers were packed up and frozen for future meals.  There was nothing left to do on Christmas day except sit and relax.  I suppose I could have written this post then, but I didn’t.  The other thing I didn’t do was take ANY Christmas dinner photos.

So instead, I’ll include this one of the team that pulled our sleigh on MCCA’s Dashing Through the Snow event earlier this month; 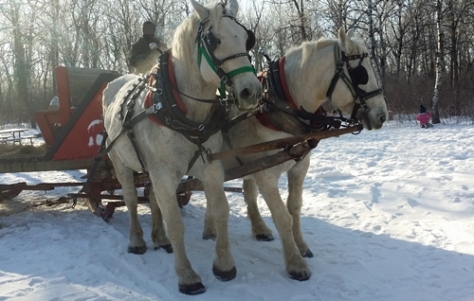 I had a great time playing outdoors with other amazing ECE’s  that day but didn’t manage to write a blog post about it either.

So now, as 2017 nears its end, I’ll begin making some plans for what I want to do in 2018. I’m not one for making ‘resolutions’ but maybe, if I reorganized my office space I’d be more inclined to sit at my desk and be productive…