June 29th is International Mud Day and here we have been celebrating it every year since its inception in 2009 (the year after I attended the World Forum for Nature Education). Of course, we do play with mud on other days too but rain or shine we have a BIG Mud Day celebration at the end of June – just before I close for my annual vacation so that is why it takes me this long to write about it.

For the past three or four years I have found it difficult to actually make ‘mud’. Yes, I know it sounds ridiculous – there is mud everywhere we go in the spring and summer after it rains – but for mud day I like to buy NEW, fresh dirt to make mud with. I never used to have difficulty finding good soil but recently it has been a challenge. I have bought many different bags of soil in search of ‘good’, mud-making soil. I’ve tried black earth, top soil and garden mix in both cheap and expensive brands from a variety of stores. Some years I’ve had several reject bags that I dumped into the garden instead of using for Mud Day.

The problem with most of these soils is that although they seem nice when I open the bag – cool, moist and smelling fabulous as all fresh soil does – they don’t mix well with water. Sure, when you add a little water to the soil it feels wet but it does not compact or hold any kind of shape. Adding more water doesn’t help – eventually it just become dirty water with bits of debris. *sigh* It shouldn’t be this hard to make mud.

The weekend before Mud Day I bought what I hoped would be good black earth – sadly, a small sample proved it was not. I called Superior Soil, explained my problem and asked if they had soil that would make nice mud. They believed they did so now my dilemma was that they are not open evenings and there were no more weekends before Mud Day. I checked the route on Google Maps – should only take 34 minutes to walk there – easy peasy walk for my little group of hikers.

The next day we packed a snack and left early in the morning so we could still have time to play in the yard for a while after our walk. My mistake was that I neglected to consider that this was not one of our normal routes hence there would be a lot of time spent sightseeing, exploring and asking many questions. Note to homeowners: If you put up little dome tents in your unfenced front yard it makes it very, very difficult for me to persuade toddlers that it is in fact private property and not a public campground.

It took us 91 minutes to get to our destination – I wondered if Google Maps may have miscalculated but I just wanted to get our soil and be on our way because if our return trip took the same length of time we would have a very late lunch. The man at Superior Soil was so charmed by the excited little group that he wouldn’t even charge us for the soil, put it in our cart for us and told us to have fun making mud pies. We had a quick (late) morning snack and headed back. Google Maps was not wrong – the return trip took only 42 minutes with tired toddlers and a heavy bag of soil.

Friday, June 28th was the day we would celebrate Mud Day. I set out a bin of water with some scoops, a wading pool full of our very special soil, a tarp and the ramp. At first, the children were all very hesitant – they tentatively played with the scoops in the water.

Seriously! Most of this group had been here for at least one other Mud Day and we’d been planning this for weeks – why the reluctance to dive in? With a little coaxing they added a bit of water to the soil and then moved small amounts of mud to the ramp. Twenty minutes so far and we’ve only got a few dirty fingers!

Finally someone got their feet dirty;

Someone thought the water bin could be used to clean their feet – LOL – there is mud everywhere now;

This one thinks she is getting clean – nope! That water bin is mostly mud now too.

After a slow start they all really got into it – no more reluctance to get dirty. We enjoyed two hours of wonderful messy mud play.

I just spent the entire three day long weekend ‘celebrating’ Canada Day by rebuilding and reorganizing some of my kitchen cupboards.  The whole project actually took much longer than I expected and there was no time for any computer work.

I only have four days of ‘work’ left before my ‘vacation’ when we will tackle the major project.  I don’t anticipate much time for computer work then either so I simply must get in a few pictures from last week’s International Mud Day.

I loved that the school-age children were here for mud day this year.  We started with a bin full of dirt and we added some water.  Some of the the children were a little unsure about the activity – only one chose to watch instead of joining in.

The school aged children were the first to move on to other activities – they miss the opportunity to play here when they are in school for so much of the day and there were other things they wanted to do.  Of course first there was some more excitement about using the hose to wash off the mud. 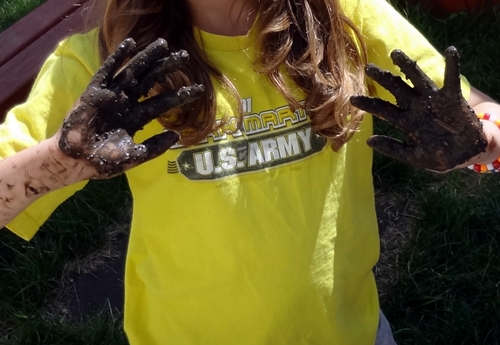 The preschoolers stayed and played in the mud for nearly an hour more – definately not going to wait until 2014 before we do this again. 🙂