Only one more week left before school begins again.  Where did the time go?

I spent my weekend working on ‘phase one’ of the playroom remodel but you’ll have to wait until after ‘phase two’ is complete before I show you what we’ve done.  Until then I’ll show you a few things that happened last week.

There were some ball games — we’re working on ‘control’ instead of ‘velocity’ or ‘distance’;

There were some other activities on the balance beams too;

One of the girls set up a store in the tipi;

Other children decided there needed to be a bank so they started a mine to dig for money — gold?  Several children were workers in the money mine collecting currency;

They didn’t get to keep it for themselves though.  They had to wait for payday like everone else.  The mined money went to the bank; 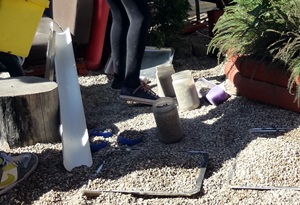 When the workers were paid they went to the stores to buy stuff – sounds familiar.

All that cash meant there was a lot of construction too; 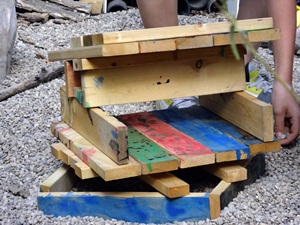 And some recreation.  This was an interesting type of bowling;

I never did understand why they anchored the foam ‘pins’ with gravel so they wouldn’t tip over;

However, I loved the way they supported the tubes – using shovels to fill the foundation pipes with gravel so they were very strong and stable;

Yes, it was a very busy week with a lot of things to do.