There was a time, very early in my childcare career, when we had ‘music time’ as a regularly scheduled group activity.  I’d bring out various musical instruments and together the children I would listen to music, play with the instruments, sing songs and do music and rhythm exercises.  It was a structured, adult led activity that required all the children to participate in a music activity at a specific time. 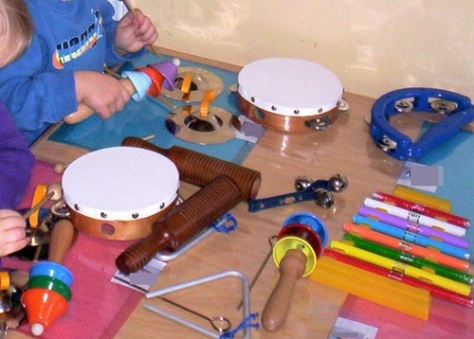 Over time I rearranged and expanded our play space so that it could include a music area – place where the musical instruments were always available and could be used by one or more children at any time.  We no longer had a scheduled music time but the children could initiate a group musical activity.  I was available to guide and assist but the children were not required to participate if they were otherwise engaged.  Some of the children spent much of their time immersed in musical exploration.  Others would come and go depending on their mood and other interests.

The music area also included a small piano keyboard which became one of the favourite musical instruments.  Many of the children learned to play their favourite melodies on this little piano and some began to make connections between printed music and the corresponding keys on the keyboard; 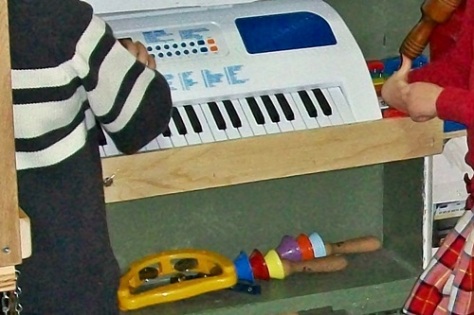 This little piano was popular but it was also annoying.  This was not a true piano keyboard – simply an electronic toy with major limitations.  It had a repertoire of recorded songs to listen to but not play along with.  While a song was playing if anyone touched a piano key the song would stop – how frustrating!  It also listed several different instruments but each one was simply a slightly different irritating digital tone which sounded nothing like the instrument it claimed to be.

Recently I replaced this toy piano with a better keyboard – this is the newly purchased item that I referred at in my last post.  It has 90 recorded songs – that we can play along with – and 150 rhythms and 400 beautiful tones that sound similar to real instruments.  It is a wonderful addition to our music area; 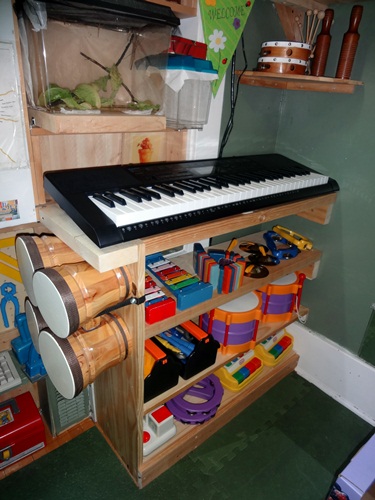 OK, so some of the tones are not so beautiful – or even musical – but they are interesting.  The children have made many discoveries about this keyboard through experimentation with little help from me.  In fact, on a couple of occasions I’ve had to ask them how they did something.  One of these instances had nothing to do with music.

They were engaged in a ‘army’ dramatic play activity and used the ‘helicopter’ and ‘gunshots’ tones.  They discovered that if they selected ‘helicopter’ and held one key down the helicopter tone would continue playing and they could select a second tone.  Of course the ‘gunshot’ tone was then used to shoot down the helicopter.  Not an activity I would have initiated but it did require a fair amount of cooperation and collaboration from the group of children involved.

I’ve printed and posted the entire list of songs, rhythms, and tones so they are available for those who can or want to learn to read the names and select specific songs or tones. 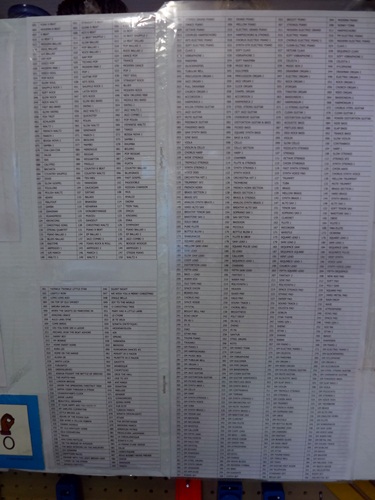 Currently the most popular song choice is Pachelbel’s ‘Canon’ which has elicited discussions about what makes certain songs popular.  We’ve done some research into the history of many of these songs. The children have identified some of the recorded songs as being ‘from’ movies and television shows and are surprised to discover that these songs are ‘so old’.

Another song that produces a lot of excitement is ‘The Wedding March’ which is always played during the numerous toy weddings and often the children use the other instruments to play along as part of ‘the band’.  This is just one of the many ways the children can incorporate music into their free play activities.  They are so much more engaged in musical activities when they have control over when and how the music is used.

3 thoughts on “The Piano Keyboard”